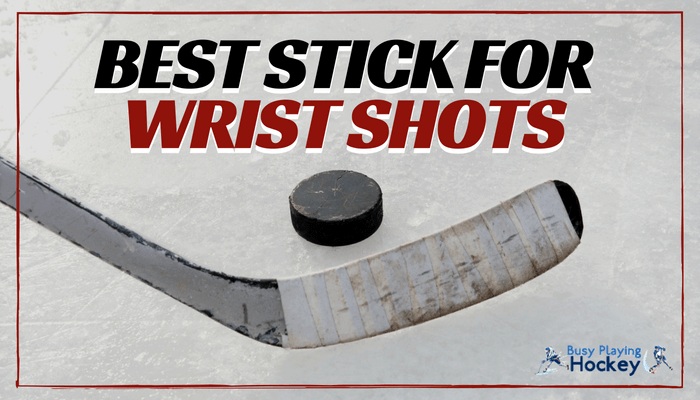 Is there anything better than snapping a wrist shot top-shelf?

In my opinion there is no better feeling than getting the goalie to shift one way, and then placing a perfectly accurate wrist shot where it needs to go. The problem is some sticks are better than others when it comes to wrister’s.

Therefore we have created this page to outline the best hockey sticks for wrist shots so you can experience the joy over and over!

So what are the best sticks for wrist shots? To me the Warrior Alpha QX is the strongest choice when it comes to wrist shots. Made from Minimus Carbo 1000 – this stick is lightweight but durable so you can keep snapping wristers over the goalies glove all game long. This stick is legit and although the price is high, the Alpha QX could be worth every penny.

This stick is named for its place in the world of hockey – the Alpha stick. It has what Warrior calls Quick Strike technology which allows for a quick load and powerful release. The low kick point helps send wrist shots off with unexpected power.

This stick is made of Minimus Carbo 1000. It’s the lightest and strongest material that Warrior has used in a stick. This material makes everything in the stick better – simply because it is so high tech.

Along with the lightweight and strong material, the stick has a taper with a stiff flex arc that keeps the blade stable and increases shot accuracy.

This special taper is called Saber Taper, which is the perfect name for a stick that sends shots with so much power. The stick also has a True1 Phantom Feel making puck control incredibly responsive due to its nearly perfect balance. The stick is even better than the rest due to the ergonomic grip that only improves the way that players play.

This stick is one of the best on the market. If you can get past the price, you will not be disappointed. This stick is another good one as CCM is known for hitting it out of the park with their updated stick technology. The Ribcor Trigger2 (Trigger Squared) is better than the previous model and is perfect for players who love to shoot the wrist shot.

It has a new taper with a top notch flex ratio. The puck is released quickly because of the low kick point and the extra flex zone in the top half of the stick makes those wrist shots fly. It also comes with Sigmatex spread-low technology for serious performance. Sigmatex is a tightly woven composite material that makes this stick strong and durable, but also lightweight.

This stick has an unusual name, but not after considering the way that it fires shots. It actually has what CCM calls the Crossbow Effect. This is due to the flex zone in the upper part of the stick that sends maximum energy to the rest of the shaft. It is designed for players who keep the stick close to their ribs when the load. The stick rockets the puck with accuracy, like a crossbow sends a bolt.

The stick also comes with Popmatrix Technology in the taper. It has enhanced the geometry of the stick to improve the way the stick bends during shots. The Ascent Blade 3 is lightweight and strong, the best that CCM has made. Players comment on the the way the puck feels when its in touch with the blade – the tactile sensation has improved over previous models. This stick and the Warrior Alpha are similarly priced. This stick is at a lower price point than the two previously mentioned sticks. And, that’s not the only way this stick differs from the CCM and Warrior sticks.

The Sherwood Rekker EK365 is made of a brand new composite material called graphene which is embedded into the stick. It is incredibly durable, so it will not break down as other players hack at it during game time.

Even with this added material, the Rekker is lightweight – in fact, it is the lightest composite stick currently on the market coming in at 380 grams at the Senior level. The carbon fibers are infused with graphene, but it still keeps the stick light, making it ideal for wrist shot action. The fact that the stick is lightweight makes it responsive, too.

Players who try the Rekker find that it moves almost instinctively as the hand and wrist release the shot.

What makes a Stick good for Wrist Shots? A low kick point gives allows hockey players to quickly release the puck and get it to the next spot. With the low kick point, the hockey stick does not bend as significantly as it does with a mid kick. This is what creates the flick of the puck. With a higher kick point, the stick bends more severely, so the energy transfer takes longer to occur.

With a low kick point and a curve designed for damage, the perfect hockey stick for wrist shots is rather easy to find.

Along with a low kick point, the curve can affect the way the wrist shot travels. An open blade with a deep curve lets players really whip the puck with the wrist shot. It gives the puck more lift and more speed, which is the goal of the wrist shot. Players who prefer wrist shots often buy slightly shorter sticks than those who take slap shots, because it gives them more control over the puck. If the stick is too long, it is difficult to get the best lift to send the puck off to the next player or to the goal.