As you can imagine, since hockey is played so quickly, some penalties can be hard to spot.

The Hooking penalty in hockey isn’t one of them!

This is one of the easiest penalties to see and players know it. When they get caught hooking another player, there isn’t much they can do about it. It’s surprising when you sometimes see players argue the call.

Players resort to hooking when they want to restrain another player.

One player will use the stick to restrain an opponent. It’s like the holding or interference call, but with the stick instead of the hands or body.

If a player is trying to hook another player, you will see the offending player’s stick off of the ice. Usually, by the time the call is made, the stick is in the jersey or equipment of the player that is being hooked.

At this point, the referee has most likely blown the whistle and the hooking call is made. 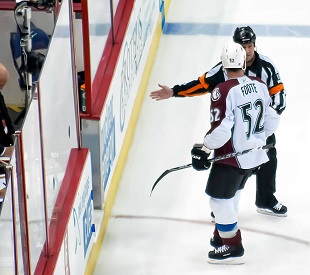 The call is usually considered a minor penalty, so players who do it and get caught get two minutes in the box. And, the opposing team gets a power play. The penalty is minor when no injuries happen.

When a Major is Called

There are times when the penalty becomes a major one with a five minute trip to the box for hooking the goalkeeper or another player and causes an injury.

Goalkeepers can also hook players, but their hooking rules differ slightly. For a goalkeeper to receive a hooking penalty, the need to use the shaft of the stick above their hands to restrain a player.

When a Game Misconduct is Called

Hooking calls can also become game misconduct calls and victims of hooking can get a chance at a penalty shot.

For a game misconduct, hooking must cause an injury and have malcontent. The penalty shot is awarded if hooking caused a player to not make a shot that would have been made. An automatic goal is awarded if an opponent hooks a player who is making a shot on goal into an empty net. If the hooking happens and makes the shot veer of course, the goal will be awarded anyways.

If players are charged with hooking and a game misconduct is called, the player will have to pay fines with a possibility of more coming from the NHL front office.

Rule Changes after the Lockout The hooking call was changed slightly after the players returned from the 2004-2005 lockout.

The bargaining agreement included rule changes, not just contract changes. Prior to the new agreement, referees were loose on the rules, which often resulted in fights and serious injuries. One of the big rule changes was the zero tolerance policy on obstruction penalties, especially those like hooking and interference.

This change with the bargaining agreement gave players the opportunity to show off their skills without worry of retaliation, sticks in their faces, and unwanted injuries. Prior to the season, players could get away with hooking and interference all over the ice. This change cleaned up the game and way that players defended the puck.

To go along with the change in making obstruction calls, referees also began calling embellished conduct, especially unsportsmanlike moves. For example, if a player is hooked, he isn’t supposed to flop especially if they were barely touched. This move is to keep both sides in check so no one gets a bigger benefit with the rule enforcement changes.

Anyone who embellishes a penalty will receive a two-minute unsportsmanlike conduct minor.

After receiving a warning letter for the first offense, players can receive fines up to $2000 and eventually, a one-game suspension will happen if a fourth offense happens.

What is Offside in Hockey?