Hockey Pants vs Girdles: Which are best? (Differences)

Confused about what is the difference between hockey pants and girdles?. And, subsequently, what in the world are breezers?

Many people ponder the difference between the bottoms that hockey players wear, especially whether those bottoms are called girdles or pants.

Rookie hockey players can become quickly confused, especially when other terms are thrown around the locker rooms, pro shops, and ice.

Table of Contents show
1 Fit and Form
2 Girdles and Shells
3 So which should I wear?
3.1 The case for a Girdle
3.2 Traditional hockey pants
3.3 Benefits of a Shell
3.4 Protect your legs 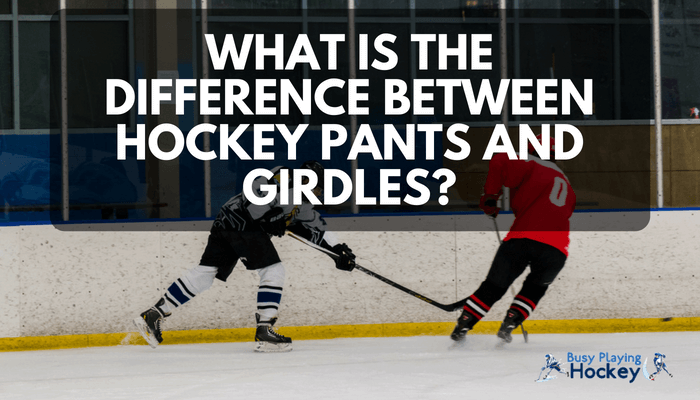 When it comes down to pants and girdles, it’s all about the fit and form.

Hockey players in the know consider hockey pants to be loose and often need suspenders to keep them from falling down. But, hockey girdles, much like a woman’s girdle, is fitted and tight.

Hockey pants (like these) are loaded with protective padding, which is why they are so loose and why they need suspenders to stay up. On the flip-side, the hockey girdle is reminiscent of compression shorts, but with substantial padding, too.

With hockey pants, the padding is flush with the exterior of the pants. Whereas with a hockey girdle, the padding sticks out from the tight fitting exterior material. When hockey players wear a girdle, they need to wear an exterior shell as a uniform. These are made of nylon and look like shorts.

When the two pieces, the girdle and the shell, are worn together, it looks like a hockey player has a pair of hockey pants on. But, for many hockey players, the girdle is comfortable because of the compression components and because they can be worn without needing suspenders over the shoulders.

So which should I wear?

How does a hockey player decide between wearing a hockey girdle or hockey pants?

Honestly, it is all about preference and what a team decides to wear. During practices, hockey players can often wear whatever protective gear they want.

The case for a Girdle

Many hockey players prefer wearing a hockey girdle (like this one) because they are so used to wearing compression shorts when they are not skating. Because the girdle is tight, hockey players comment on how easy it is to move in it. Players who enjoy wearing hockey pants like how loose they are and that gives them freedom to move with ease. So, really, it does come down to preference. Those who like hockey pants do not like the tightness of the girdle and they often complain about how distracting it is to constantly adjust the girdle.

But, if hockey players buy equipment that fits properly, they should not have trouble with either . The best girdles and pants come with all the necessary padding and more and many girdles even have cups, too. You can’t beat that! Something to remember is that hockey is a game of tradition and players have been wearing hockey pants since the beginning. They predate girdles and traditional hockey players have stuck with them despite being able to update to a girdle.

Despite hockey being a traditional game, there are still plenty of players who buck tradition and prefer to go with the newest, latest, and trendiest equipment. In fact, many professional, elite players prefer to wear girdles when they are competing for a chance to win the Stanley Cup.

Benefits of a Shell

If you do choose to wear a girdle, you will need to wear a hockey shell on the ice as well. These are nylon shorts that you wear over the girdle. Some hockey players also wear shells over the hockey pants, especially if they play on several teams.

Another term you might hear is a breezer and this is simply a synonym for hockey pants and is a colloquial term used in the northern American states like Minnesota and North Dakota. Skaters in Saskatchewan and Manitoba occasionally use this term, too.

When you choose hockey pants, it is important to get them to fit properly (especially for defensemen!).

The belt on the pants should be higher than your hips so that your pelvis and internal organs are properly protected. By wearing them properly with the belt on the waist, you will be able to move more freely than if you wear hockey pants incorrectly.

When buying hockey pants, it is wise to try them on with the other padding, like shoulder and shin pads. If you do this, you will be able to get a real feel for how everything fits during the heat of the game. You will also be able to see if your body is properly protected, too.

Girdles will not be as long, so the shin guard padding should extend into the shell to fully protect the legs.

I recently purchased CCM HP31 pro stock ice pants online. I was pretty disappointed in how clunky and loose they fit. They knocked around like loose body armor. Horrible. I’m not keen on trying on things at the store while having a salesman hovering around me but I might have to get over that. I’ve been wrong on about 75% of my hockey gear choices so far.

Thanks for the feedback!